In August, against a backdrop of rising geo-political tensions, many Australasian companies announced their half year or full year financial results; the impact of disruptive technologies was evident in many profit announcements.

We caution on reading too much in the aggregate company profit results, as increasingly the divergence in results is becoming obvious. For instance retail, media and telecommunication companies by and large reported challenging operating conditions. In contrast at the other end of the spectrum companies in the aged care, healthcare and technology produced strong results. Without doubt the strongest result of the recent reporting cycle came from a2 milk, which provided a further upgrade to profit forecasts as they benefit from strong Chinese demand for infant formula.

Another core domestic development was the Reserve Bank of New Zealand (RBNZ)’s Monetary Policy Statement.  Since cutting the Official Cash Rate (OCR) to 1.75% in November ‘16, the RBNZ in Feb, May, and Aug ‘17 have illustrated a high threshold - to not only change the OCR, but to even signal a move in their OCR projections. The end of Graeme Wheeler’s tenure complicates the picture.  But fundamentally, policy makers at the RBNZ appear to be very comfortable to wait and see if the impact of delivering 0.75% of OCR cuts through 2016 has been enough.

As we look forward over the next month or so, political risks may appear more significant. This does not just reflect the New Zealand election in coming weeks, where the outcome increasingly seems uncertain, but also Germany and China with the 19th National Congress of the Communist Party.  Geo-political tensions between the US and North Korea have also heightened.

In New Zealand, the Labour Party moved to neck and neck in the polls with the National Party for the first time in over 10 years, reflecting a remarkable rise since the appointment of Jacinda Ardern as leader a few weeks ago. 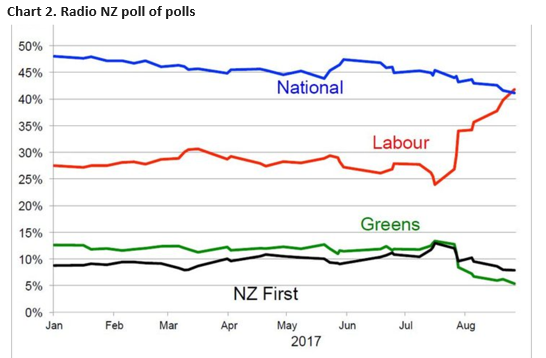 By international standards, both National and Labour-led governments appear relatively centrist, without large policy differences.  While a Labour-led Government may tend to be more fiscally liberal than a National-led Government, relative to global alternatives, the New Zealand economy is still likely to be considered relatively low risk, regardless of which party is in power.  Similarly, Labour and National are both committed to the RBNZ having a flexible inflation targeting regime, with Labour supporting some tweaks to bring RBNZ governance in line with overseas practice.

Turning to overseas risks, the escalation of geo-political tensions between the US and North Korea remains high on our watch list.  After a period of relative calm earlier in the month, tensions ramped up again when North Korea fired a missile over Japan in what Prime Minister Shinzo Abe described as a “reckless action… an unprecedented, serious and a grave threat to our nation".   Tensions further escalated when North Korea undertook its largest unground nuclear test, and Trump threatened a response against North Korea of “fire and fury”.

With relatively inexperienced and unpredictable leadership in both North Korea and the United States, we see further sabre rattling from both sides as a potential driver of flight to safety in markets, especially in an environment where equity valuations are high, and markets are pricing low volatility in equities.

We are increasingly of the view that short and long-term rates in New Zealand will remain fairly low and stable over the medium term.  The primary reasons are that structural forces are keeping inflation low, and that high debt levels around the world constraining the ability of economies to function with higher interest rates.

Globally, macroeconomic data has continued to print at quite impressive levels in many cases. For example, in the US, the widely watched ISM Purchasing Manager’s Index reached 58.8 (50 is neutral), which is the highest level since 2011. Reinforcing the sense of strength in the business sector, earnings for listed equities have also been solid.  Meanwhile, core CPI inflation remains muted, at 1.7% year-on-year.  Low inflation data has enabled the bond markets to expect the Federal Reserve to be exceedingly gradual with rate hikes.   The messages coming from other central bankers at the Jackson Hole conference were similar.   We expect global monetary policy will remain accommodative for some time.

For our fixed interest portfolios, we are currently long-duration versus benchmark, particularly in the 0-3 year part of the yield curve.  Even though our central scenario is stable interest rates, over the next 12 to 18 months we see the balance of risks in New Zealand tilted towards rate cuts, rather than hikes.

In our opinion equity markets are being shaped by two large forces.

First, the persistent Goldilocks economic environment, where growth is robust and inflation absent. This means Central Banks are in no hurry to raise interest rates, and hence investors continue to look for both yield and growth assets. Second, is the impact ongoing rapid technological change which is shaping consumer and business behaviour across nearly every household and company. For the most part whether it is the application of robotics, artificial intelligence or the sharing economy (Facebook, Uber, Airbnb), these technologies are driving productivity and low inflation. However, many businesses are facing large disruptive threats.

Looking forward the risk for equity markets centres on the high valuation of companies, on the potential for growth to fall if political outcomes influence business or consumer behaviour, and on the ongoing disruption from technological change. In our opinion the risks are rising for a period of higher volatility in coming months and we favour more concentrated equity portfolios during this time.

IMPORTANT NOTICE AND DISCLAIMER
Harbour Asset Management Limited is the issuer and manager of the Harbour Investment Funds. Investors must receive and should read carefully the Product Disclosure Statement, available at www.harbourasset.co.nz.We are required to publish quarterly Fund updates showing returns and total fees during the previous year, also available at www.harbourasset.co.nz. Harbour Asset Management Limited also manages wholesale unit trusts. To invest as a Wholesale Investor, investors must fit the criteria as set out in the Financial Markets Conduct Act 2013.

This publication is provided in good faith for general information purposes only. Information has been prepared from sources believed to be reliable and accurate at the time of publication, but this is not guaranteed. Information, analysis or views contained herein reflect a judgement at the date of publication and are subject to change without notice. This is not intended to constitute advice to any person.  To the extent that any such information, analysis, opinions or views constitutes advice, it does not take into account any person’s particular financial situation or goals and, accordingly, does not constitute personalised advice under the Financial Advisers Act 2008. This does not constitute advice of a legal, accounting, tax or other nature to any persons. You should consult your tax adviser in order to understand the impact of investment decisions on your tax position. The price, value and income derived from investments may fluctuate and investors may get back less than originally invested. Where an investment is denominated in a foreign currency, changes in rates of exchange may have an adverse effect on the value, price or income of the investment. Actual performance will be affected by fund charges as well as the timing of an investor’s cash flows into or out of the Fund. Past performance is not indicative of future results, and no representation or warranty, express or implied, is made regarding future performance. Neither Harbour Asset Management Limited nor any other person guarantees repayment of any capital or any returns on capital invested in the investments. To the maximum extent permitted by law, no liability or responsibility is accepted for any loss or damage, direct or consequential, arising from or in connection with this or its contents.