Sustainability is an integral part of both our investment process and our team values.

Harbour Asset Management was the winner of the Most Ethical Retail Investment provider. The judges were particularly impressed by Harbour’s strong research capability and analysis of Australian and New Zealand companies. They have demonstrated in-depth engagement with companies, with examples of how they have helped to improve social, environmental and governance performance.

Harbour is a market leader for integrating ESG research into our investment process.

As a responsible corporate citizen, with a fiduciary duty to our clients, we have an obligation to consider all types of risk. This includes the environmental, social and governance risks associated with the companies we invest in.

As active investors, we believe that ESG risks and opportunities are often not fully reflected in the market price for securities. We are able to use this knowledge to invest to achieve better outcomes for our clients.

At Harbour, we employ a strategy of integration and company engagement. This means our team researches all the companies we invest in and actively checks for any environmental, social or governance (ESG) risks that may apply to them. It helps our Portfolio Managers develop an understanding of each company, and influences not only whether we invest in companies, but also how much. It helps us to unearth companies which may be great opportunities for long term growth, as well as companies with potentially hidden risks.

We are able to use our role as a shareholder to engage with company leadership, highlight any concerns we may have and use our influence to encourage better behaviour.

We also use a baseline of exclusions in the funds we manage, to remove companies whose business activities may lead to significant harm in society. Exclusions include tobacco, nuclear explosives, cluster munitions, anti-personnel mines, pornography and controversial firearms.

Our annual Corporate Behaviour Survey researches how companies rate on issues like:

Harbour has been a UNPRI signatory since 2010.

Harbour is also a member of the RIAA.

Harbour’s engagement program not only focuses on constructively working with companies in our investment universe, but also contributing to public policy/regulatory consultations to positively influence policy settings relating to ESG considerations.

We demonstrate our responsible investing philosophy and fiduciary duty by keeping active in our investments through our extensive engagement programme and proxy voting process.

Record of votes cast for Harbour Funds in 2019 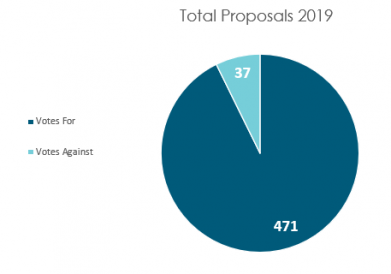 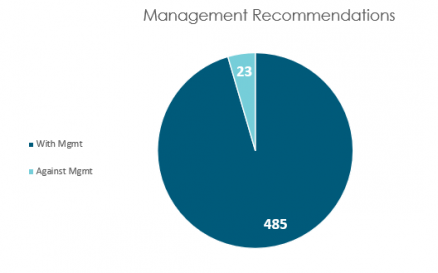 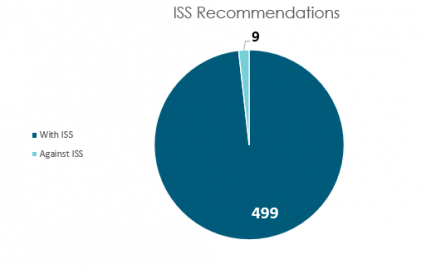 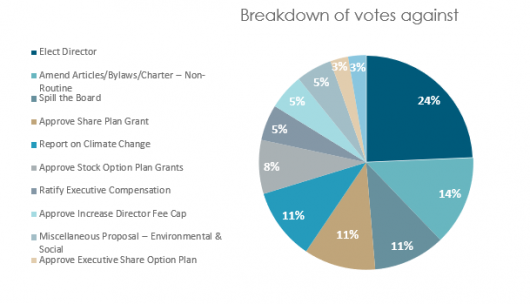 Record of votes cast for Harbour Funds in 2020 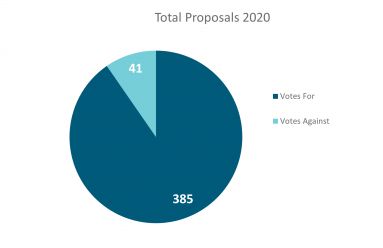 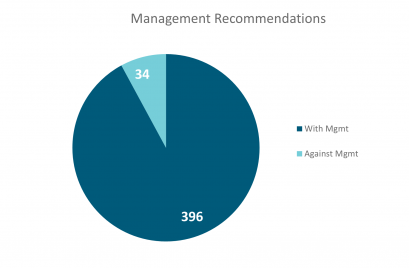 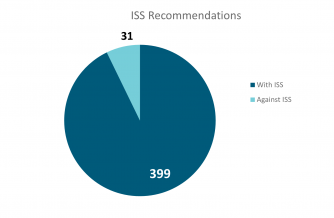 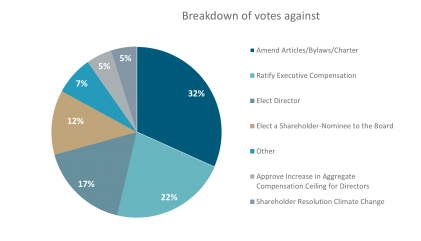 Record of votes cast for Harbour Funds in 2021 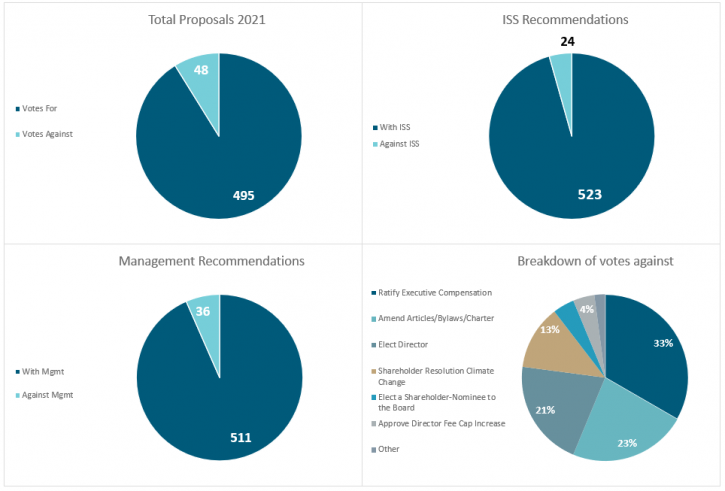 Our engagement over 2021 continued to focus on key themes such as climate change and modern slavery, as well as a greater emphasis on positive sustainability outcomes. Climate change remained front of mind with the global COP26 summit as well as our domestic Climate Change Commission issuing their advice to Government. The latter particularly drove our climate related engagement given the sector-specific impacts implicated by the policy recommendations.

On the social side, we engaged companies on the welfare of their employees, especially when we observed health and safety incidents or higher injury frequency rates. We also continued to discuss modern slavery risk and company responses following our in-depth research project on the issue.

Another aspect receiving greater attention is the shift towards investing for positive sustainability outcomes. This has been driven by the need to finance solutions for key environmental and social problems with important frameworks in place to promote this such as the UN’s Sustainable Development Goals and the Sustainable Finance Forum’s 2030 Roadmap for Action. These have influenced our strategy to increasingly align our existing investments with these goals, as well as launching a new impact-specific fund that involves deep engagement with issuers which meet the eligibility criteria to ensure an active contribution to sustainable outcomes.

Our engagement strategy also continued to capture companies with contentious ESG issues such as Board composition and executive/director remuneration particularly around company AGMs. Executive remuneration has been especially controversial over the past two years given the wide range of financial outcomes observed due to Covid related disruption, and the differing approaches companies have adopted to compensate management.

These targeted engagements were supplemented by the general ESG engagement we conduct across our whole NZ investment universe each year as part of our Corporate Behaviour Survey process.

The Corporate Behaviour Survey is our primary way to comprehensively assess how well each company in our NZ investment universe is addressing ESG considerations with engagement playing a key part. More information can be found in our ESG policy at Harbour-ESG-Policy-FINAL.pdf (harbourasset.co.nz)

During the year we conducted 40 ESG related engagements on ad hoc issues in addition to the 61 engagements we conduct annually as part of our Corporate Behaviour Survey process.

For the ad hoc engagements, these were primarily focused on NZ companies with 28 out of the total 40 conducted. This reflects the fact that our portfolios are either constrained to the NZ market or have a proportionately larger weighting to NZ companies compared to Australia.

There were a variety of different ESG issues covered in these engagements and, in some cases, they involved multiple interactions with the company. As part of our engagement strategy, we engaged with 6 companies on climate change, 8 on social aspects including modern slavery and 11 on sustainable outcomes. We continued to engage on AGM resolutions relating to board composition through 6 director election engagements, and 5 on executive/director remuneration. There were also 4 on miscellaneous ESG issues.

Outcomes from these engagements were generally constructive with many of the companies receptive to our concerns and in some cases taking action to improve on the issues identified, as demonstrated through the case studies below. We are cognisant that some of these issues are long-term in nature and take time to enact change. There continued to be ongoing logistical challenges brought by Covid-19 restrictions, such as the inability to thoroughly interview and recruit new Board candidates, which we acknowledged and accounted for in our voting decisions. We are both patient and confident companies will eventually make the appropriate adjustments, but we will continue to monitor and liaise with them until these are made.

We engaged with the CEO of a NZ consumer staples company regarding the consideration to acquire an emissions intensive asset. We expressed our view that although we are supportive of the company owning key infrastructure in the upstream supply chain, coal fired boilers for spray drying are not best practice despite lower short-term costs.  We gave an example of how a global peer made a capital investment into an electric/gas boiler a couple of years ago.

We encouraged the company to take a strong environmental focus when new capital expenditure options are reviewed, noting it is a key consideration for us and other global investors for future capital allocations.

Outcome: The CEO clearly took our feedback on board because, in the past year after acquiring a majority stake in the dairy company, they announced a project to fully electricity their operations by replacing all coal fired boiling with a high-pressure electric boiler.

We engaged with an Australian consumer discretionary company prior to their AGM on the lack of gender diversity on their Board. The company explained they have been constrained in their selection of directors given the representation by a large shareholder but expect that by their next AGM they will be able to transition into a more diverse Board.

After considering the company’s feedback, we chose to vote against their director resolution given the lack of gender diversity to hopefully accelerate the Board restructuring.

Outcome: The company was understanding and receptive to a protest vote on gender diversity grounds and seemed genuinely committed to improving this going forward, so although the resolution still passed, we are optimistic on the long-term efficacy of this engagement and vote.

Outcome: This change in Board structure represented a significant, positive engagement outcome as we have long advocated the need for improved independence with their Board and management since the company listed. This change in Board composition provides a better balance of skills, experience, and diversity to promote improved governance of the company.

Overall, the year continued to see disruption from new Covid variants and associated Government restrictions. But once again, important environmental and social issues like climate change and modern slavery remained a major focus, particularly on the regulatory front but also from corporate activity. We were encouraged by positive outcomes from some of our engagements including new decarbonisation initiatives and improvements in board structures. The coming year is expected to involve a further focus on these themes, particularly climate change with a growing trend towards alignment with net zero and the release of the Government’s emissions reduction plan. Our engagement strategy therefore will continue to challenge companies on their climate transition strategies and hold them accountable to their stated targets.

In addition, we will continue to engage companies as any material ESG issues arise, particularly on contentious areas proposed during company AGMs. This also includes maintaining our dialogue with companies that we have identified as lagging in an issue such as Board independence, remuneration or ESG disclosure, by constructively working with them in the long term to achieve the best outcomes for shareholders.