Implications of an Evergrande default 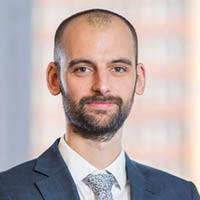 Last August Chinese authorities drafted the “three red lines” policy putting constraints upon property developers’ balance sheets with the long-term aim of increasing financial stability.  Evergrande is one of the largest developers and one of the highest geared.  To meet these policy constraints, it began discounting apartment units and selling its assets. Strapped for cash, it has even settled debts by swapping properties with creditors. These liquidity concerns have been helped along by a slowing property market, reducing margins on the apartments it sells. Things have become so bad that bondholders will be sweating on coupons due to be received on the 23rd of this month.

In its most recent financials, Evergrande had NZ$125bn in borrowings outstanding and significantly more owing to trade creditors. For context, those borrowings are about half the bonds of Australia’s largest bank, CBA, or about 100bps of capital across the Chinese banking system (which currently sits at 11.9%), or a seventh of Lehman Brothers’ debt pile when it failed.

So, should we be worried?

Evergrande has NZ$125bn bonds outstanding, however it is not a service business. Because it owns hard assets, there may be some recovery value.  The magnitude of losses is absorbable across the financial system, but as we have learnt from previous crises, trust between financial institutions is vital.  For now, the Chinese interbank lending market is unperturbed. Below we have created a composite of the spreads on the debt of five of Evergrande’s lenders demonstrating trust prevails. 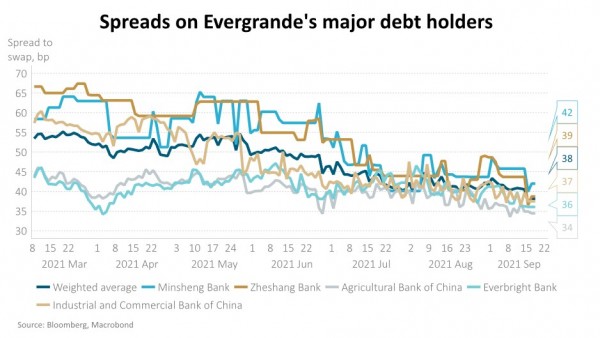 In formulating the “three red lines policy”, Chinese authorities have considered the implications of allowing property developers to fail and they have experience at surgically removing dominos. Last year saw the rescue of Anbang Insurance, and authorities also immunised the wider sector from the failure of Baoshang Bank.

Over 10% of Evergrande’s debt is issued offshore. Against a backdrop of Chinese regulators’ desire for companies to be more self-reliant (and fears of data sovereignty), it is plausible that recovery rates are lower offshore.  Debt registers list most large global asset managers as holders, likely impacting 401(k) balances, however we note its 2025 debt has been marked below 50 cents in the dollar for the past three months.

There may be some form of Chinese Government intervention to lessen the pain. It’s very common in China for families to put deposits on homes before they are built, rather than developers building properties in the hope of buyers turning up. That means there is a lot of depositors’ cash at stake, around 53 million square metres of homes worth, motivating the Chinese Government to ensure these people aren’t left without a home.

Looking beyond Evergrande to the broader development sector is less comforting. In large part, other developers aren’t in a similar position, given they are not as over-extended and still have access to finance, but there are a worrying number of exceptions.  We demonstrate this below by plotting a composition of the spreads on the debt of 5 of the largest players.  This is important, not just for the direct financial implications and the potential to constrain broader liquidity, but also given the feedback loop via construction activity, a large source of employment. 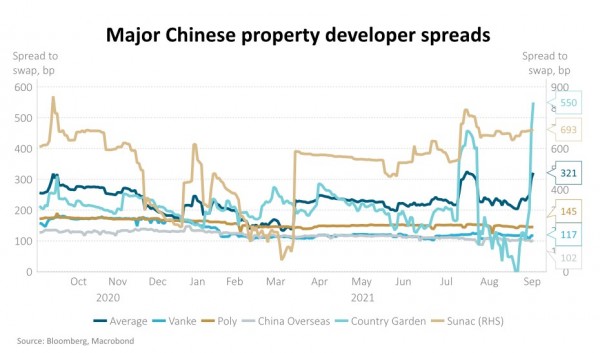 The market has good reason to believe Evergrande defaulting on its borrowings is manageable, however this shouldn’t equate to complacency.  We have combed Evergrande’s disclosure for the largest holders of its debt. We will continue to watch for any undisclosed and less obvious ramifications, including the wealth management products it backs but holds off balance sheet.  Examples like this reinforce that Australasian assets may be a more easily understood second derivative exposure to Asian growth.

IMPORTANT NOTICE AND DISCLAIMER
Harbour Asset Management Limited is the issuer and manager of the Harbour Investment Funds. Investors must receive and should read carefully the Product Disclosure Statement, available at www.harbourasset.co.nz. We are required to publish quarterly Fund updates showing returns and total fees during the previous year, also available at www.harbourasset.co.nz.  Harbour Asset Management Limited also manages wholesale unit trusts. To invest as a Wholesale Investor, investors must fit the criteria as set out in the Financial Markets Conduct Act 2013. This publication is provided in good faith for general information purposes only. Information has been prepared from sources believed to be reliable and accurate at the time of publication, but this is not guaranteed. Information, analysis or views contained herein reflect a judgement at the date of publication and are subject to change without notice. This is not intended to constitute advice to any person.  To the extent that any such information, analysis, opinions or views constitutes advice, it does not take into account any person’s particular financial situation or goals and, accordingly, does not constitute financial advice under the Financial Markets Conduct Act 2013. This does not constitute advice of a legal, accounting, tax or other nature to any persons.  You should consult your tax adviser in order to understand the impact of investment decisions on your tax position. The price, value and income derived from investments may fluctuate and investors may get back less than originally invested.  Where an investment is denominated in a foreign currency, changes in rates of exchange may have an adverse effect on the value, price or income of the investment. Actual performance will be affected by fund charges as well as the timing of an investor’s cash flows into or out of the Fund.. Past performance is not indicative of future results, and no representation or warranty, express or implied, is made regarding future performance. Neither Harbour Asset Management Limited nor any other person guarantees repayment of any capital or any returns on capital invested in the investments. To the maximum extent permitted by law, no liability or responsibility is accepted for any loss or damage, direct or consequential, arising from or in connection with this or its contents.