Bond yields hit record lows; but a rate cut is not a done deal

New Zealand government stock yields fell to record low levels across all maturities last week, as the Reserve Bank acknowledged the weaker global economic outlook and the ensuing risks to the domestic economy. We think:

The decline in yields has been dramatic this year, with the benchmark 10-year yield falling by 0.6% to 1.75%. On the back of the Reserve Bank’s comment that “the more likely direction of our next OCR move is down”, the market has priced in an OCR rate of 1.3% in February 2020, down from 1.75% at present. 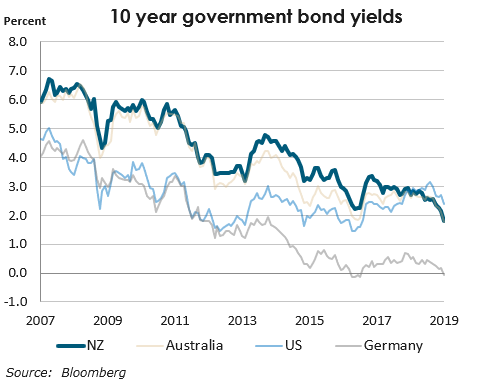 While the phrase “more likely” may only reflect a skew in a range of outcomes, the decision to include this language is not taken lightly. Indeed, Governor Orr has expressed satisfaction that the market has moved to price in cuts and taken the NZD lower.

The economy has slowed over recent quarters to a growth rate of 2.3%, but other data are quite satisfactory. The labour market is judged to be near its maximum sustainable rate and core CPI has been climbing towards 2%. We are nowhere near the recessionary conditions one might expect to see when bonds yields are hitting record lows.

So, what has been driving the move lower in yields and why are market participants pricing OCR cuts? We can identify a range of contributing factors:

So, what do we make of all this? Firstly, it is hard to argue about the direction the market has taken. Nearly all of the news flow has been negative. Where we are less convinced is with regards to the magnitude of the rally, some of which relates to the likelihood of rate cuts, both in New Zealand and offshore.

In New Zealand, monetary policy is already very accommodative and has been a factor behind the strong labour market and rising inflation. Core inflation is gradually rising, and firms look likely to face ongoing cost pressures, particularly for wages, where skills shortages and increases in the minimum wage are continuing. With our terms of trade at a healthy level, with the government planning to increase spending, and with initiatives such as the NZ-China Year of Tourism, the forward news flow will not all be unsettling. The financial markets are pretty close to treating rate cuts as a done deal, but we would not go further than the RBNZ’s line that “the more likely direction … is down.”

Pricing at the longer end of the yield curve for 10-year and longer bonds is also expensive in our opinion. The 10-year swap rate, at 2.15%, is roughly pricing an OCR rate of 1.25% over the next 5 years and 2% over the subsequent 5 years. That is well below the Reserve Bank’s estimated neutral cash rate, of 3.5%, even allowing for a drift lower over time.

Putting it all together, we have a news flow that has taken yields to record low levels. Valuations are undeniably expensive. Whether this is sustained or not will be determined by economic data over the coming months, as this will drive central bank policy decisions and the willingness of investors to keep putting money into low-yielding bonds.

IMPORTANT NOTICE AND DISCLAIMER
This Harbour Navigator is provided for general information purposes only. The information is given in good faith and has been prepared from published information and other sources believed to be reliable, accurate and complete at the time of preparation but its accuracy and completeness is not guaranteed. Information and any analysis, opinions or views contained herein reflect a judgement at the date of publication and are subject to change without notice. To the extent that any such information, analysis, opinions or views constitute advice, they do not take into account any person’s particular financial situation or goals and, accordingly, do not constitute personalised advice under the Financial Advisers Act 2008, nor do they constitute  advice of a legal, tax, accounting or other nature to any persons. Investment in funds managed by Harbour Asset Management Limited can only be made using the Investment Statement, which should be read carefully before an investment decision is made. The price, value and income derived from investments may fluctuate in that values can go down as well as up and investors may get back less than originally invested. Where an investment is denominated in a foreign currency, changes in rates of exchange may have an adverse effect on the value, price or income of the investment. Reference to taxation or the impact of taxation does not constitute tax advice. The rules on and bases of taxation can change. The value of any tax reliefs will depend on your circumstances. You should consult your tax adviser in order to understand the impact of investment decisions on your tax position. No person guarantees repayment of any capital or payment of any returns on capital invested in the funds. Actual performance will be affected by fund charges. Past performance is not indicative of future results, and no representation or warranty, express or implied, is made regarding future performance. To the maximum extent permitted by law, no liability or responsibility is accepted for any loss or damage, direct or consequential, arising from or in connection with this presentation or its contents.