As we sat down to write the top 10 risks and opportunities this time last year, there was a plethora of things to consider including US/China trade tensions, elections, and global growth. As it transpired, there was only one risk that really mattered, COVID-19. While a key focus of COVID-19 was the speed of the downturn in investment markets, to us, it would be remiss to not focus on the other important aspects. Such as the speed of the fiscal and monetary response, the acceleration we have seen in technological trends and perhaps the most incredible feat, that we have created multiple effective vaccines five times quicker than any other time in history. Necessity really is the mother of invention.

So, as we look forward to 2021, we do so with one eye on the risks, but the other firmly planted on the opportunities that lie ahead. Click through to see our thoughts articulated in video as well.

Progress towards an effective COVID-19 vaccine has been faster than many anticipated. However, there are several risks that still exist with COVID-19. Firstly, since the proportion of the population with natural antibodies is still unknown, as is the level of infection required for herd immunity (natural or through inoculation), the containment of COVID-19 could come earlier or later depending on these variables. Additionally, the outbreak of COVID-19 in minks shows that we could potentially be vulnerable if the virus mutates to a point where vaccines are less effective. As a vaccine is further rolled out in early 2021, we are likely to see borders gradually reopen around the world. There is the risk that New Zealand could potentially be later to open our borders as we are one of the few countries in the world to be pursuing an eradication strategy, meaning we are more sensitive to the risks that come with border re-openings. Based on documented vaccine agreements, our vaccine rollout programme is likely to be behind that of the rest of the developed world.

Reserve Bank of New Zealand (RBNZ) rate cuts mean it has never been cheaper to service mortgage debt. In response, New Zealand house prices have risen 15% over the past year to record highs and are considered expensive on traditional valuation metrics. The New Zealand house price-to-income ratio, for example, increased to 7.9 in November from 6.8 a year earlier and an average of 5.6 since 2004. With house price growth likely to continue to outstrip growth in incomes, the housing market is becoming increasingly vulnerable to a sharp correction should demand and supply conditions rapidly change. While an increase in interest rates is unlikely to be the catalyst for a housing market correction next year, the likely reimposition of RBNZ Loan-to-Value Ratio restrictions from March, alongside lower population growth (at least until borders reopen), may start to take the shine off. Prime Minister Jacinda Ardern has ruled out a capital gains tax but the Labour Government may choose to use its strong political position to introduce changes in other areas to reduce housing demand (e.g. extending the holding period for the IRD’s “bright-line” test that currently requires income tax to be paid on the capital gains of an investment property that is bought and sold within 5 years) or increase its supply (e.g. Resource Management Act changes). 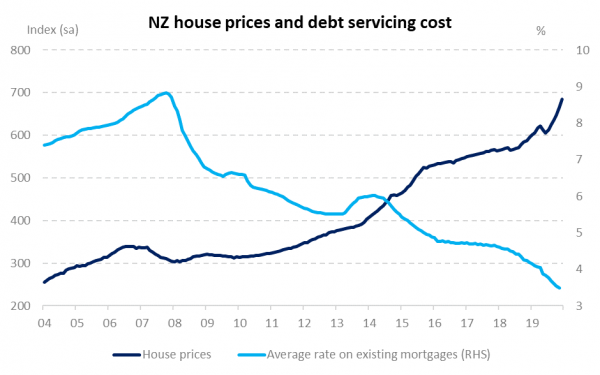 While it is highly likely we see more cohesive foreign policy under a Biden-led US government, trade tensions are not exclusively a US and China theme as evidenced by the flattening of global trade in recent years. Australia and China relations have also soured in recent months, leading to the introduction of tariffs on wine, beef, barley, lobsters and coal, amongst other things. New Zealand is not immune from any Chinese backlash and must balance contentious issues such as Hong Kong and the South China Sea with the importance of China as a trading partner.

4. US Democrats achieve a “clean sweep”

The Democrats still have a chance to take control of the US Senate if they win both seats at the 5 January Georgia runoff (happening because no candidate got more than 50% of the vote at the 3 November election). Under this scenario, Democrats and Republicans would have the same number of Senate seats (50 each) but control would come via Vice President-elect, Kamala Harris, who holds the casting vote as President of the Senate. A Democratic Senate gives the party greater power to pass large additional fiscal stimulus, increase corporate tax rates and introduce regulation (the Democrats had passed a $2.2trn package in the House prior to the election, markets currently expect a c.$900bn package to pass imminently). While polls suggest the individual Democratic candidates are slightly ahead, betting/prediction markets imply a 30-40% chance of victory.

Environmental Social and Governance (ESG) investing grew in popularity prior to the Global Financial Crisis in 2008, however, its progress was halted as investors turned their attention to repairing portfolio performance. Today, there seems to be growing acceptance and evidence that ESG investing, while focussed on non-financial outcomes, can still contribute to better financial performance. COVID-19, if anything, seems to have accelerated the trend in ESG investing with 70% of customers willing to pay more for an ESG-aware solution compared to 58% at the end of 2019. 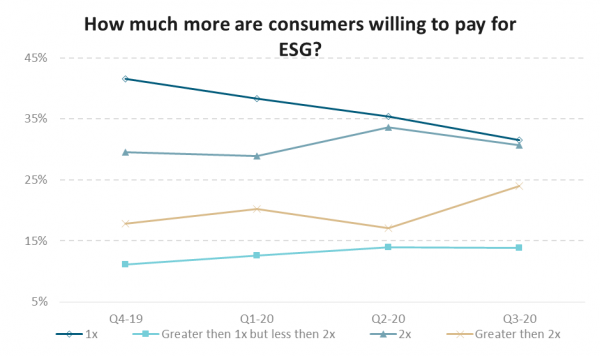 The last decade has strained the faith of even the most devoted value investor as secular forces, such as the move away from bricks and mortar retailing and growth in mega tech has created a tough environment for value stocks. While we do not see those secular forces declining anytime soon, there is scope for a rally in 2021, especially if the vaccine rollout goes better than expected and activity resumes at a faster pace. Under this scenario, we could see a steeper yield curve, firmer commodity prices which should benefit financials and energy, two more value focussed sectors which have lagged broader markets following the Global Financial Crisis.

7. Inflation rises from the dead

Central banks have missed inflation targets to the downside for most of the past decade and are now increasingly comfortable to target inflation on an average basis and to be “behind the curve”, i.e. to withdraw stimulus more slowly than they may have done in the past to ensure the sustainability of the recovery and achievement of objectives. However, the unprecedented amount of stimulus delivered in response to COVID-19, alongside disruptions in global supply chains due to social distancing, has increased concern about a rapid re-emergence. The global economy and financial markets are not well positioned for a sudden reduction of monetary policy support and an associated sharp rise in interest rates. 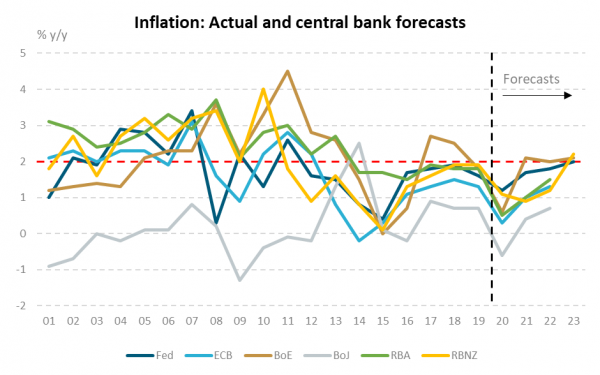 This century we have seen corporate tax rates fall significantly across the developed world which has provided a boost to after tax earnings for investors. However, a hangover from COVID-19 is that governments now have larger debt servicing burdens and will be tightening fiscal policy in 2021 as many 2020 support programmes expire. We may be at the trough of global tax rates. 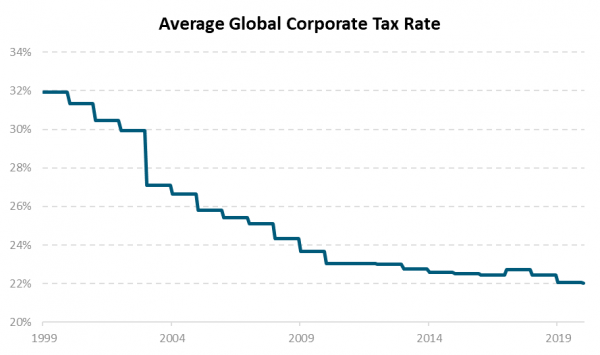 9. The USD continues its descent

The USD depreciation reduces the local-currency value of unhedged USD-denominated assets, all else equal. Despite depreciating more than 10% since March, the trade-weighted USD remains above its long-term average – supported by superior relative returns to capital versus Europe and Japan, reflecting ongoing economic outperformance, and the USD’s global reserve currency status. Further USD depreciation, however, may be encouraged by the ongoing global economic recovery and the countercyclical nature of the currency. The prospect of growing concern about the US twin current account and fiscal deficits may also drive additional currency weakness.

After contracting 10% in the first quarter of this year, China’s economy has recovered strongly and is likely to end the year more than 5% larger than it was at the end of 2019. While this economic strength raises risks of policy tightening, inflation remains low and China’s leaders are continuing to emphasise the importance of increasing household income and domestic demand. Chinese consumption, as a percentage of GDP, remains much lower than other large economies. New Zealand is well placed to benefit from consumption-led growth in China, if trade relations remain healthy (see risk number 3 above). China is our largest trading partner (taking 25% of our exports) and large parts of our commodity exports are high-end agricultural products that are attractive to its growing middle class. 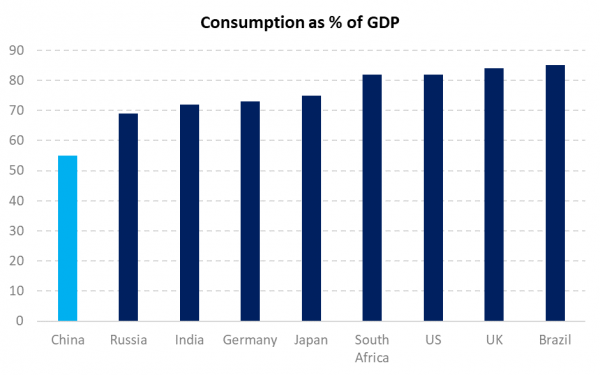 Source: Barclays Research.IMPORTANT NOTICE AND DISCLAIMER
Harbour Asset Management Limited is the issuer and manager of the Harbour Investment Funds. Investors must receive and should read carefully the Product Disclosure Statement, available at www.harbourasset.co.nz. We are required to publish quarterly Fund updates showing returns and total fees during the previous year, also available at www.harbourasset.co.nz. Harbour Asset Management Limited also manages wholesale unit trusts. To invest as a Wholesale Investor, investors must fit the criteria as set out in the Financial Markets Conduct Act 2013. This publication is provided in good faith for general information purposes only. Information has been prepared from sources believed to be reliable and accurate at the time of publication, but this is not guaranteed. Information, analysis or views contained herein reflect a judgement at the date of publication and are subject to change without notice. This is not intended to constitute advice to any person. To the extent that any such information, analysis, opinions or views constitutes advice, it does not consider any person’s particular financial situation or goals and, accordingly, does not constitute personalised advice under the Financial Advisers Act 2008. This does not constitute advice of a legal, accounting, tax or other nature to any persons. You should consult your tax adviser in order to understand the impact of investment decisions on your tax position. The price, value and income derived from investments may fluctuate and investors may get back less than originally invested. Where an investment is denominated in a foreign currency, changes in rates of exchange may have an adverse effect on the value, price or income of the investment. Actual performance will be affected by fund charges as well as the timing of an investor’s cash flows into or out of the Fund. Past performance is not indicative of future results, and no representation or warranty, express or implied, is made regarding future performance. Neither Harbour Asset Management Limited nor any other person guarantees repayment of any capital or any returns on capital invested in the investments. To the maximum extent permitted by law, no liability or responsibility is accepted for any loss or damage, direct or consequential, arising from or in connection with this or its contents.