Changes to banking rules are set to have a meaningful impact on New Zealand’s fixed interest market in 2019:

This paper examines these three changes.

NZ registered banks are currently required to hold equity capital equal to at least 8.5% of their risk-weighted assets. The RBNZ is proposing to increase the required minimum to 16% for large banks and 15% for their smaller counterparts. The proposal will be phased in over five years. The RBNZ is also proposing that the larger banks use a more conservative methodology in calculating capital ratios, such that the current stated average tier 1 equity ratio of 13.4% would reduce to 11.6%. 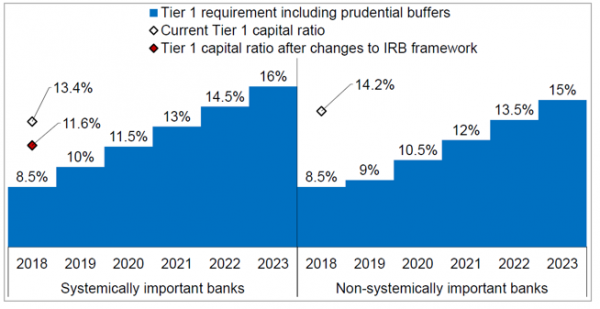 To put those numbers in perspective:

Why so big? Some see this as an opening gambit in what will become a negotiation with the banks. The RBNZ may change its stance, but we instead see it as the RBNZ’s true position, based on cited evidence. The RBNZ has set a very low-risk appetite for bank failure given its view on the ensuing economic and societal costs. Capital has been set on the theoretical expectation that a bank failure will occur once every 200 years.

We liken banks holding significant capital to a nation’s electricity sector having spare capacity to protect against a blackout. Avoiding a blackout is of value to society. However, investing the capital necessary to build spare capacity comes at a cost. The capital invested in the banks could be put to alternative uses. We expect there to be a significant political discourse on this matter, as high bank capital may crowd-out alternative investment uses of that capital.

Beyond the obvious first round impacts, there are likely to be second-order impacts as bank investors set a new return on equity requirement to reflect the banks’ lower risk profile. The banks’ ability to recoup this via higher net interest margins, as well as any constraints on capital availability, will influence the impact on credit growth in the economy.

2. Depositors to rank ahead of bondholders?

The RBNZ is in the early stages of consulting on NZ’s bank creditor protection framework. Unlike the bank capital proposal, we think this is an area where the bank is yet to formulate a firm view. One of the options, however, is to explicitly and legislatively favour depositors over bondholders in the event of bank failure.

Since the GFC, banks have been able to post pools of mortgages with the RBNZ. These pools, or, ‘internal securitisations’, were ring-fenced but not issued as publicly-traded securities. While these securities can create bank liquidity (funding to enable banks to borrow short and lend long), they have a number of limitations:

The RBNZ is finalising a review which is likely to see internal securitisations replaced through time by publicly-issued securities to be known as Residential Mortgage Obligations (RMOs). After consultation, the RBNZ has proposed a relatively straightforward format for these securities.

The bank’s primary aim has been to reduce the Crown’s contingent liability by creating and facilitating a liquid market of transparent, high-quality securities. Indeed, the requirement for a minimum of 10% subordination or a AAA-rating at the senior tranche ensures a very high-quality security. By way of comparison, it is likely that the rating agencies would require just 4% subordination for a AAA pool of prime NZ bank mortgages; in Australia the big four banks typically top-up this subordination to 8% for AAA tranches. The RBNZ has strict stipulated standards for mortgages eligible to be included but, importantly, these standards are not so strict in our opinion as to result in cherry-picking of the best mortgages at the expense of senior unsecured creditors. The banks are required to retain skin in the game by holding the first loss piece comprising a minimum of 8% of each issue.

What we are watching

We have spared readers numerous other nuanced impacts; such as the effect on offshore funding and hence the cost of hedging. While all three pieces of the puzzle are yet to be fully shaped, of most interest to us is the impact of higher capital on bank lending. This is difficult to estimate at present; however we deduce the Reserve Bank does not think it will have as large of an impact as does the balance of academic literature we have reviewed, and thus we see the risk to the economic outlook as skewed to the downside.