NZ Election: Down to the No.8 Wire

The New Zealand election on 23 September may come down to the (No. 8) wire. By international standards, both National and Labour-led governments appear relatively centrist, without large policy differences. However, New Zealand equity market valuations are full, meaning that the market may become increasingly sensitive to changes in macro-economic settings, uncertainty and change. Some investors may want to be patient and see how the election evolves.

At the time of writing, in our opinion, there are no major policy differences which are likely to significantly influence particular equity market sectors.

A change to a Labour-led NZ Government may see a change in tax laws, which influence business and consumer confidence, and the willingness of businesses to make investment and employment decisions. Changes to labour policies, including the introduction of a living wage requirement, may impact on some companies with higher labour inputs (for example, quick service retail), but could have positive impacts in the rest of the economy.

The need for coalition party support to form a Government may see either a National or Labour-led Government tighten migration or environmental policies. If introduced, such policy changes may increase near term costs and reduce short term growth for some parts of the economy. A Labour-led coalition is unlikely to further privatise state owned assets.

While a Labour-led Government may tend to be more fiscally liberal than a National-led Government, relative to global alternatives, the New Zealand economy is still likely to be considered relatively low risk, regardless of which party is in power. For example, Labour’s spending policies would still see net government debt to GDP below 30%, albeit a few years after National.  Similarly, Labour and National are committed to the RBNZ having a flexible inflation targeting regime, though Labour supports some tweaks to bring RBNZ governance in line with overseas practice.[1]

Markets globally have become used to unexpected election outcomes, with investors initially reacting negatively to political change, only to reconsider and reinvest into assets in countries where major change has occurred (as has been the case recently in the US, UK and France) . It is unclear if global investors into New Zealand assets are becoming wary of a potential change in New Zealand Government. However, it is possible that the potential for a change, in combination with slightly softer economic data (e.g. dairy prices, terms of trade) has contributed to a recent weakening in the NZ dollar against some of its major trading partners.

There is potential for a delayed global reaction to a change in New Zealand Government. Research by UBS, shown in figure 1 below, suggests that the New Zealand equity market has underperformed the US and Australian equity markets in the three months following a change in Prime Minister, over the last four change events (this research does not cover the most recent Key-to-English change). Important to note, though, is that economic events around these Prime Minister change events may have had an influence on the underperformance of the NZ market.

Given the full pricing of the New Zealand equity market, we would expect volatility and stock return dispersion to increase over the last third of 2017, whether due to the influence of the general election, or changes in global macro-economic policy settings. In a broader sense, Harbour believes that significant technological change is more likely to remain the most powerful influence on equity market returns.

After a change of Prime Minister 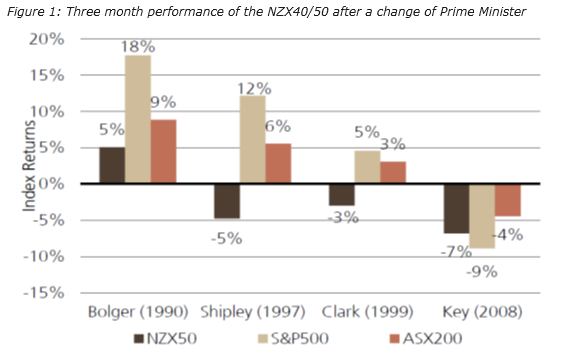 IMPORTANT NOTICE AND DISCLAIMER
This Harbour Navigator is provided for general information purposes only. The information is given in good faith and has been prepared from published information and other sources believed to be reliable, accurate and complete at the time of preparation but its accuracy and completeness is not guaranteed. Information and any analysis, opinions or views contained herein reflect a judgement at the date of publication and are subject to change without notice. To the extent that any such information, analysis, opinions or views constitute advice, they do not take into account any person’s particular financial situation or goals and, accordingly, do not constitute personalised advice under the Financial Advisers Act 2008, nor do they constitute advice of a legal, tax, accounting or other nature to any persons. Investment in funds managed by Harbour Asset Management Limited can only be made using the Product Disclosure Statement, which should be read carefully before an investment decision is made. The price, value and income derived from investments may fluctuate in that values can go down as well as up and investors may get back less than originally invested. Where an investment is denominated in a foreign currency, changes in rates of exchange may have an adverse effect on the value, price or income of the investment. Reference to taxation or the impact of taxation does not constitute tax advice. The rules on and bases of taxation can change. The value of any tax reliefs will depend on your circumstances. You should consult your tax adviser in order to understand the impact of investment decisions on your tax position. No person guarantees repayment of any capital or payment of any returns on capital invested in the funds. Actual performance will be affected by fund charges. Past performance is not indicative of future results, and no representation or warranty, express or implied, is made regarding future performance. To the maximum extent permitted by law, no liability or responsibility is accepted for any loss or damage, direct or consequential, arising from or in connection with this presentation or its contents.