In last week’s Monetary Policy Statement (MPS), the RBNZ surprised markets by shifting the projected start date of any hiking cycle a full 12 months into 2020 and publishing a relatively aggressive alternative scenario that sees the RBNZ cutting 100 basis points if GDP growth disappoints. With a new Governor and new Policy Targets Agreement (PTA), this has turned out to be the first real chance to gain a read on the new regime at the RBNZ.

We believe there are four main take-outs from the August MPS.

1. Willingness to use the full width of the 1-3% inflation target range. Under the Wheeler regime, there was a new clause introduced in the PTA that the Bank should aim for the 2% mid-point of the 1-3% target. Since then, CPI inflation has spent the majority of time stuck below 2%, and the Bank has faced criticism from the media about failing to meet its inflation objective. While not deliberately aiming to overshoot 2% on the upside, our interpretation of the August MPS is that the RBNZ is more willing to risk missing the 2% midpoint on the upside than missing it on the downside. In other words, the so-called path of least regret is keeping the OCR too low for too long, rather than lifting the OCR prematurely. Having just received a new dual mandate for inflation and employment, our take is that the RBNZ is also being careful not to look like an old-school hawkish inflation fighter at the first sign that core inflation pressures are rising.

2. A broad interpretation of the new dual mandate. While the RBNZ’s mandate has moved from a pure inflation target to a dual inflation and employment goal, the RBNZ’s actions around the August MPS suggest it is taking an even broader interpretation of its role. That is, given the current state of the economy, the RBNZ sees its role as providing a sound policy contribution that is for the benefit of New Zealand Inc. In the current environment, where domestic economic activity looks potentially vulnerable with weak business confidence, we believe this has lead the RBNZ to talk up the economy, encourage other commentators to ignore low business confidence as an aberration, and emphasise its willingness to cut the OCR to support the economy if that turns out to be needed. This broad interpretation of the mandate could be something that the market still needs to get its head around.

3. The importance of a weaker NZ dollar to economic policy. In the current environment with the domestic economy showing signs of faltering (with lower business confidence, cooling housing market, tighter credit conditions, and fiscal stimulus delayed by KiwiBuild), it becomes even more important that a strong net export sector fills the gap. We expect this is why delivering a weaker NZ dollar appears to have become a key part of delivering this strategy. In our view, shifting the projected start date of any hiking cycle a full 12 months into 2020 (leapfrogging all market economists in the process) provided the necessary tactical surprise to push the NZ dollar lower, and help deliver on the strategy. The NZ dollar now sits around 2% below its level before the MPS, and 1.5% lower on an NZ TWI basis.

4. Watch, Worry and Wait. With a new Governor now in place, we suspect that all the RBNZ’s previous economic analysis, assumptions and favoured indicators are now being tested and challenged internally. This came across most clearly in the August MPS with the Bank’s Sectoral Factor Model for inflation. While this had previously been touted as the RBNZ’s favoured measure of core inflation (and rising from 1.5% to 1.7% since the May MPS), it has now been downgraded to just one measure in a suite of potential indicators. The implication of this is that it will take the RBNZ much more time to have confidence that all of its suite of inflation measures are rising sufficiently to start the process of lifting the OCR back to a more neutral level. It provides more scope for the RBNZ to leave the OCR on hold for a new long period, while they continue to watch, worry and wait for more conclusive evidence.

So, what does all this mean for markets?

The clearest implication is that inflation expectations should rise, which favours an exposure to the NZ Government bond inflation indexed linked market. Currently, these bonds only imply that NZ inflation will average 1.20% over the next 10 years; whereas the RBNZ appears determined to see inflation sit higher, at or above 2%. To the extent that these securities start to reflect market inflation expectations closer to 2%, it should be seen as a vote of confidence in the RBNZ’s inflation credibility.

The second implication is that the yield curve looks more at risk of steepening than flattening. That is, if the RBNZ delivers on its risk scenario and cuts the OCR by 100 basis points, short-term interest rates would fall, but long-term interest rates may not follow as these actions re-enforce higher long-term inflation expectations.

Finally, whatever scenario plays out, we expect this new regime at the RBNZ may result in increased volatility in rates and FX markets. The August MPS was our first real take on the new regime at the RBNZ, but there will be more for the market to learn, including a potential willingness to tactically surprise the market to deliver its economic strategy. In addition, next year the regime will change again with a move to a new committee-based structure, which could generate another round of changes and learnings.

Looking further ahead, if the RBNZ is successful in achieving its broadly defined mandate of providing a sound policy contribution that is for the benefit of New Zealand Inc, then eventually the economy should deliver solid growth, reach full employment, and see inflation settle back comfortably at 2%. In that environment, it would be natural to expect the current easy monetary conditions to be replaced with normalisation of interest rates back to more neutral levels. However, that is not a discussion for 2018. Even in that scenario, we suspect it will take until the latter end of 2019 before the RBNZ changes its tune. 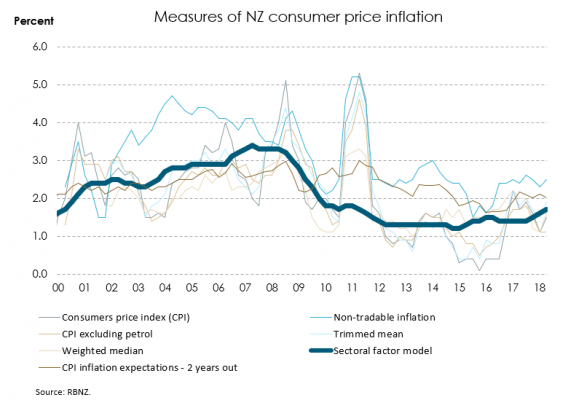