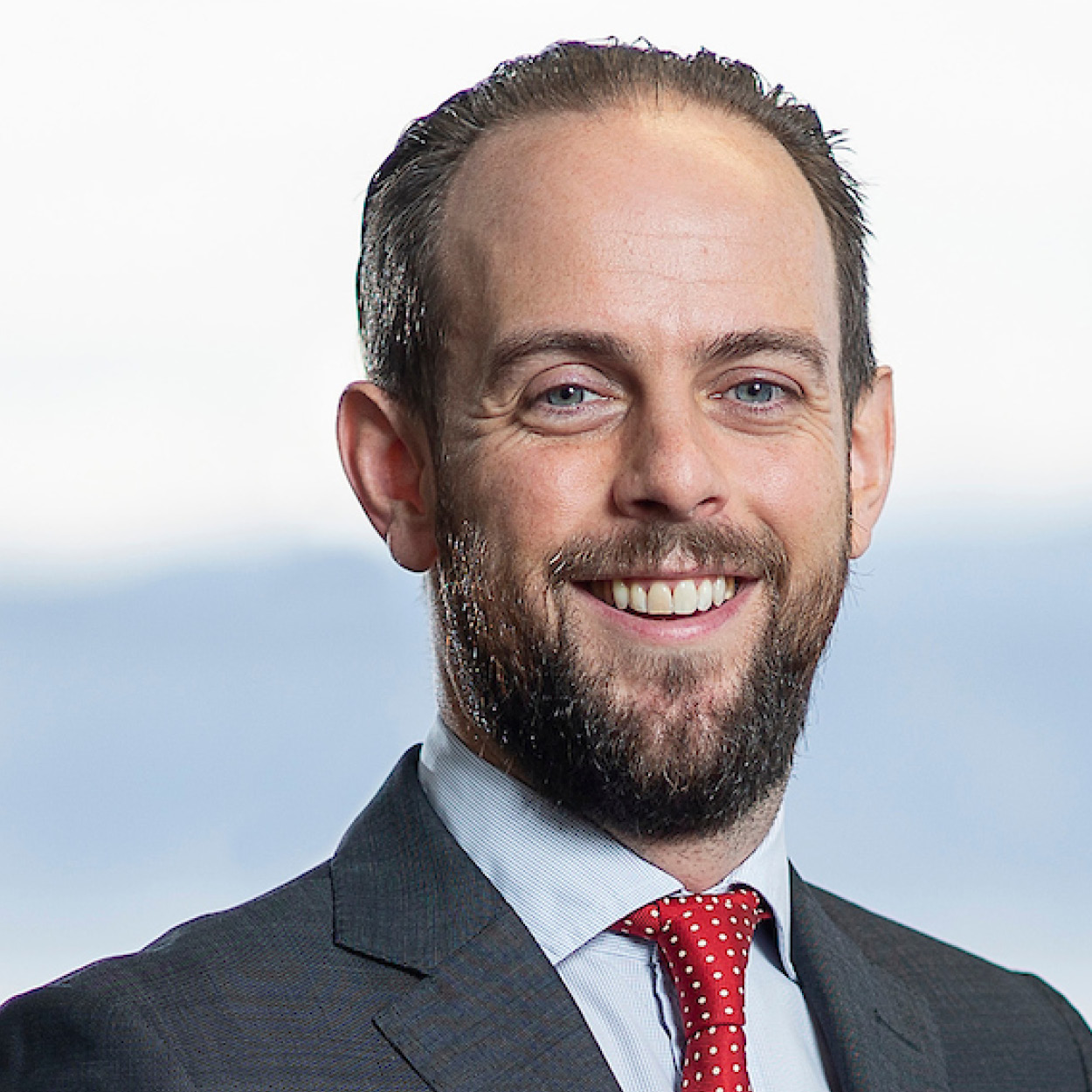 The Reserve Bank of New Zealand (RBNZ) announced additional monetary stimulus last week, indicating a more dovish monetary policy reaction function than we had assumed. Despite noting that the level of monetary stimulus required in its baseline scenario was broadly unchanged relative to the May Monetary Policy Statement (MPS), the RBNZ announced a much larger-than-expected increase to its Large-Scale Asset Purchase (LSAP) programme, from $60bn to $100bn. Within its new baseline forecast, the assumption of a longer border closure and a higher New Zealand Dollar (NZD) broadly offset the recent improvement in economic activity and more expansionary fiscal policy. With no pressing need for LSAP expansion, less than $30bn of bonds have been purchased to date, the RBNZ clearly wanted to send a dovish signal and put further downward pressure on interest rates. The programme length was extended to June 2022, from May 2021, and the holding limit for nominal New Zealand Government bonds increased from 50% of outstanding, to 60%. While the implied pro-rata rate of purchases (about $770mn/week) is lower than the recent pace ($970mn/week), the RBNZ indicated its intention to frontload the programme by announcing an increase in total purchases, including inflation-indexed government bonds and Local Government Funding Agency bonds, to $1090mn this week.

The RBNZ’s dovish message was reinforced by emphasising continued health-related downside economic risks that may require additional policy tools to be implemented – a view formed prior to confirmation of COVID-19 community transmission in Auckland. Among these additional tools, the Monetary Policy Committee (MPC) expressed a preference for a negative Official Cash Rate (OCR) and funding retail banks directly at near-OCR interest rates, a funding for lending scheme. Europe provides the global precedent for negative rates, but the associated lower policy efficacy, and financial stability risks, cause much debate with the Reserve Bank of Australia and the US Federal Reserve strong opponents, for example (we wrote more on this subject here). Global examples of funding for lending schemes usually involve conditions that specify where banks can lend the cheap funding provided by the central bank with small to medium sized businesses the normal target, rather than large businesses and households.

The “unconstrained” OCR forecast suggests much more needs to be done. Since the May MPS, the RBNZ has been publishing a path of where it would set the OCR were there no practical lower bound to achieve its dual mandate of 2% inflation and maximum sustainable employment. This “unconstrained” OCR path remained largely unchanged from the May MPS forecasts, showing a value of -1.2% for this quarter and a low of -2.4% in the middle of next year. One method of assessing the overall stance of monetary policy in an unconventional environment is to estimate a “shadow” short-term interest rate using information from the yield curve. Leo Krippner’s method[1] is most commonly used and suggests, at the end of July 2020, the New Zealand “shadow” short-term interest rate was -1.1%, broadly consistent with the RBNZ unconstrained OCR forecast for this quarter, but also suggesting additional work needs to be done to achieve a rate of -2.4% next year.

The role of a weaker NZD to support the economic recovery was downplayed. Foreign asset purchases (also known as foreign exchange intervention) were not put forward as a preferred additional stimulus tool and the RBNZ noted reasons for recent NZD strength on a trade-weighted basis, such as well supported export commodity prices. The baseline economic forecasts also indicated no expectation of exchange rate depreciation with the NZD trade-weighted index (TWI) forecast to remain close to current levels.

So where to from here?

Lower yields and flatter curves are clearly the RBNZ’s immediate goal, but New Zealand Government bonds have become expensive relative to foreign equivalents. Governor Adrian Orr, Assistant Governor Christian Hawkesby and Chief Economist Yuong Ha all made deliberate comments that they wished to see the government bond yield curve lower. Once Thursday’s regular tender of government bonds was out of the way, the market obliged, taking yields over 10 basis points (bps) lower, while offshore markets headed in the opposite direction. New Zealand bond yields are now into what we consider to be “expensive” territory vis-à-vis other markets, notably Australia, so we think that further falls in yield may be hard to come by.

The recent sharp rise in global breakeven inflation rates tells a more positive story. The widening difference between nominal bond yields and real yields provided by inflation-linked bonds may indicate the bond market’s increasing expectation of higher inflation over the next 5-20 years. This likely reflects the large amount of global policy stimulus, the ongoing re-opening of the global economy and promising developments in COVID-19 treatments. It also reflects some disquiet amongst analysts, who see risks that the 40-year downward trend in inflation could be on the cusp of a reversal, as the unprecedented amount of monetary and fiscal stimulus being put to work to support economies now, proves excessive in years to come. We don’t know that yet, but we do know that most central banks are willing, at this stage, to be “behind the curve” and would like to see clear evidence that inflation is moving higher before they ease back on the throttle.

In this context, last week’s dovish shift by the RBNZ has helped trigger a sharp rebound in New Zealand’s breakeven inflation rates. Some catch-up with global moves had started and more was due. We see this move highlighting that, over a 2- to 3-year period, there is the possibility of quite opposing economic outcomes. While the impact of COVID-19 could be long-lasting, with weak employment and inflation for some time, there is also a scenario where we see a steady recovery, reinforced by very easy monetary policy and where inflation moves through the top of the central bank’s 1% to 3% target band. At this stage, the RBNZ would be delighted if the bond market saw growth and inflation risks more evenly balanced. Their action last week was aimed at reducing downside risks. 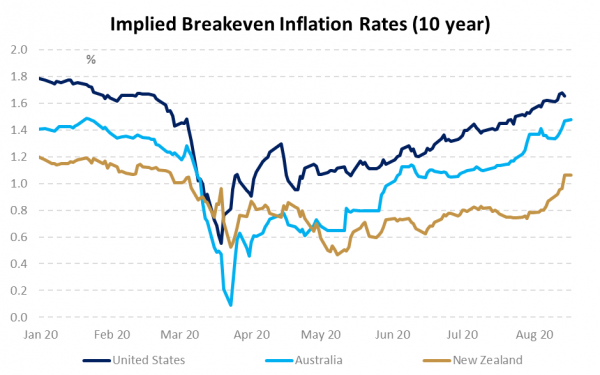 With the RBNZ’s support firmly in place, the focus now shifts to fiscal policy ahead of the 17 October election, with Auckland in Alert Level 3, the borders still closed and wage subsidies continued for only a short period of time. The Government announced a two-week extension to the eight-week wage subsidy scheme at the end of last week such that applications can be made up to 15 September. Further fiscal stimulus, however, remains uncertain after Finance Minister, Grant Robertson, recently said the unspent $14bn from the $50bn COVID Response and Recovery Fund would not be spent before the election, which has been delayed to 17 October. We should find out more at the Government’s Pre-election Economic and Fiscal Update (PREFU) that will now be delivered on 16 September, rather than 20 August. Additional fiscal stimulus is unlikely to be accompanied by an increase in government bond supply with ample funding available within the existing bond programme. 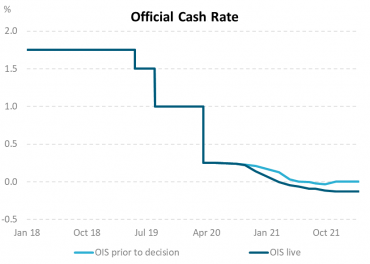 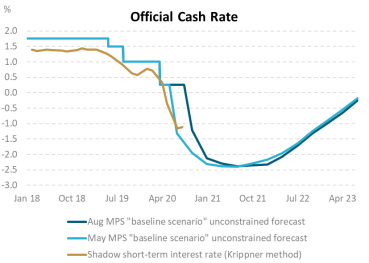