Top 10 risks (and opportunities) for the next decade

This trend is not uncommon. It is very likely that many of the world’s largest companies today will not be as dominant as they once were in a decade’s time. This gives rise to risks, but also creates opportunities for investors.

Each of the risks we have identified not only has implications for share markets, be it for specific geographies and sectors, but also for another key driver of market returns, the direction of interest rate policy. With the returns of the next decade likely to be harder fought than the returns of the preceding one, we believe these risks should be at the forefront of the decision-making process of long-term investors.

Most of the growth in the world’s middle class will come from Asia over the coming decade with India and China the largest contributors. Middle-class consumption is a key driver of global demand and consumption preferences within this group will be an important determinant of sectoral equity performance. For example, China’s growing middle class have shown a greater propensity to consume than other countries and imported products, such as cars and luxury goods, are particularly popular. 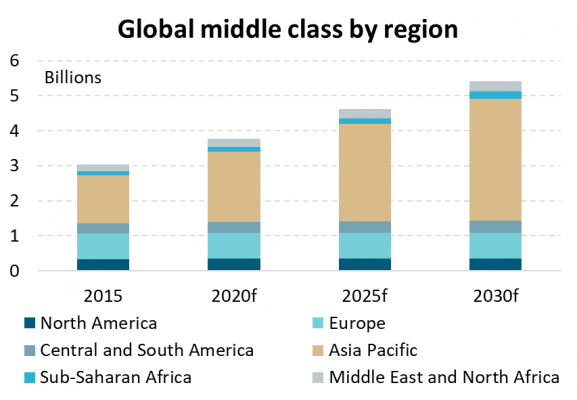 The global healthcare sector should continue to expand over the next decade as growing and ageing populations demand more from healthcare providers. This will likely be compounded by increasing rates of chronic disease, even with technological advancement helping to ease the burden. The World Health Organisation projects that, by 2020, chronic diseases will account for almost three-quarters of all deaths worldwide and 60% of the burden of chronic diseases will fall on developing countries. Global health expenditure has steadily increased since 2000 and now represents more than 6% of global GDP. Increases in the US have been particularly pronounced with the country now spending about 17% of its GDP on healthcare - 35% more than in 2000. 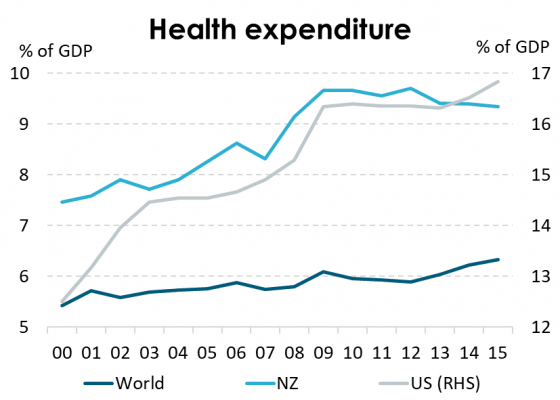 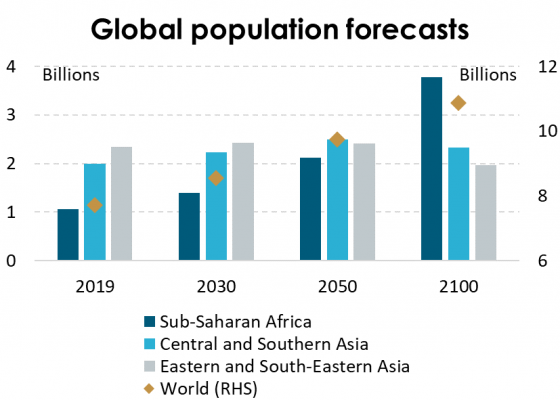 Dramatic technological change is likely to characterise the next decade. More and more data will be available in real time and having the resource and infrastructure to analyse this will determine its usefulness for businesses. The introduction and expansion of 5G mobile broadband will vastly improve global connectivity with about 75% of all global mobile connections forecast to be 4G or better by 2025. Artificial Intelligence (AI) is already improving customer satisfaction via virtual assistance and is increasingly being applied to anticipate equipment failure and detect financial crime. Cloud computing will continue to offer flexibility and cost savings to businesses versus the traditional server-based models. Hybrid cloud computing is now offering additional flexibility by allowing data and applications to be shared between private and public cloud services. 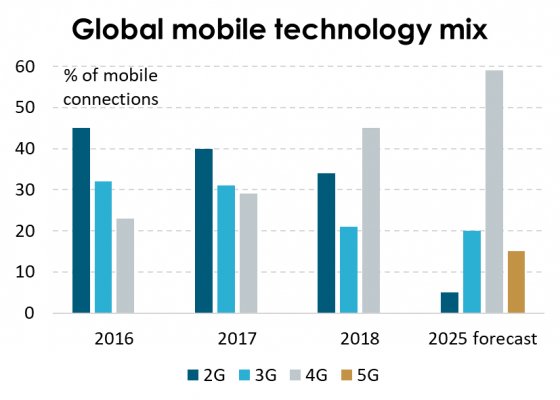 Sustainability has become an important part of investment decisions over the past decade, with an emphasis on firms’ environmental, social and governance (ESG) policies. Google searches of related terms, for example, have increased 3-4 times in the past four years. The next decade should see improvements in technology and transparency providing investors with better data on which to base sustainable investment decisions. While consideration for the environment sits within the ESG framework, the climate has already deteriorated and will continue to impact the global economy. Greater volatility in weather conditions will impact food production, social cohesion and political stability. The insurance industry will continue to be challenged and governments that prioritise economic growth may constrain necessary environmental reform. 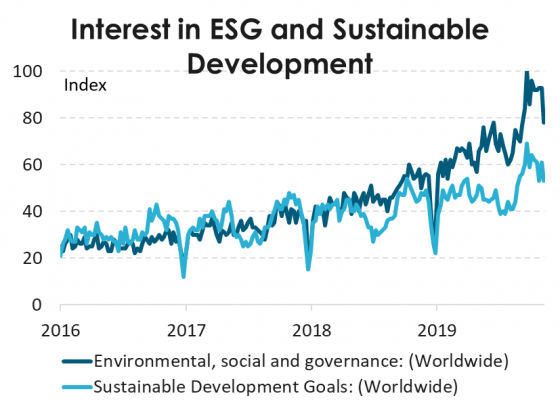 The US-China trade war is a symptom of the global rise in populism and associated desire to deglobalise. This embodies an aversion to trade, immigration and corporate influence. With middle income growth weak and inequality high, support for populism and deglobalisation is likely to persist over the coming decade. In Europe, for example, populist parties were part of government in 10 countries in 2017, versus just two in 2010. 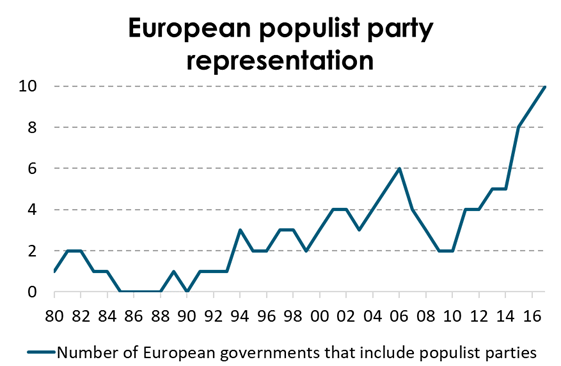 Note: The graph shows the number of democratically elected governments in Europe year by year that includes at least one populist party. Source: TIMBRO.

Global income inequality has declined since the early 1990s but the gap between rich and poor remains large. The Gini coefficient[1] is the most common income inequality metric and measures the extent to which the distribution of incomes deviates from a perfectly equal distribution. A Gini coefficient of zero represents perfect equality and 100, perfect inequality. The most recent estimates for the global economy are just above 60. There is also an increasing focus on the concentration of wealth and income among the very rich. For example, more than 20% of global income goes to the top 1% of earners. 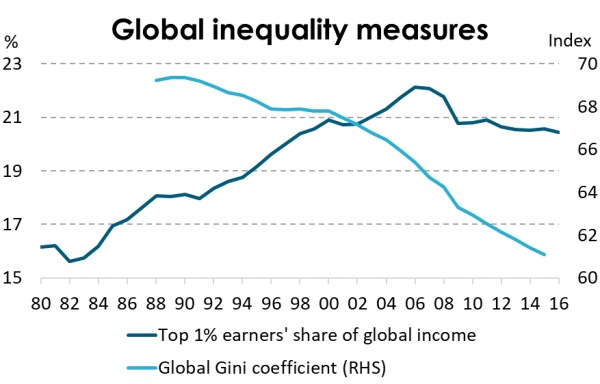 The rapid pace of technological development will place increasing demand on global regulators and businesses over the coming decade. NZ businesses, for example, cite regulation and paperwork as the most important problem they face. Fintech, drones and self-driving cars are recent examples of innovation that have challenged existing regulatory approaches. Focus has recently shifted to more controversial areas such as regulation and censorship of social media. Even if regulation can keep pace, implementation and enforcement is critical. Environmental laws, for example, have seen a 38-fold increase since 1972 but implementation and enforcement remain major challenges. 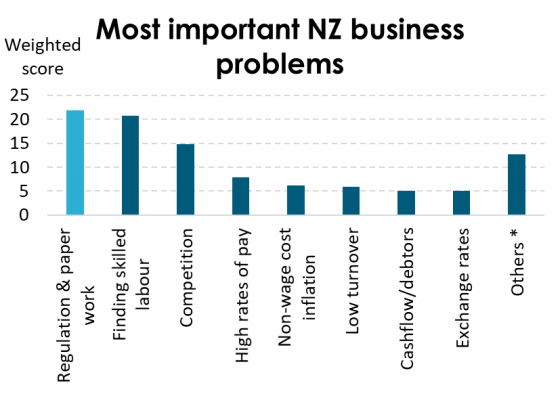 * Others includes internal management difficulties, access to finance, interest rates and other reasons not specified
Note: Weighted score is weighted using a score of 3 points for a 1st ranking, 2 for 2nd and 1 for 3rd, then scaled to 100 (i.e. a relative % weight) to allow better comparison across groups.
Source: ANZ New Zealand Business Outlook.

For investors, the next decade is made especially difficult because no asset class currently appears cheap. Fixed income markets are particularly unappealing with interest rates close to historic lows and credit spreads tight. Equities have a slightly less challenging outlook, with price-to-earnings multiples not extreme and equity risk premia (the additional return equities offer over fixed income) still healthy despite most markets trading at or close to historic highs. 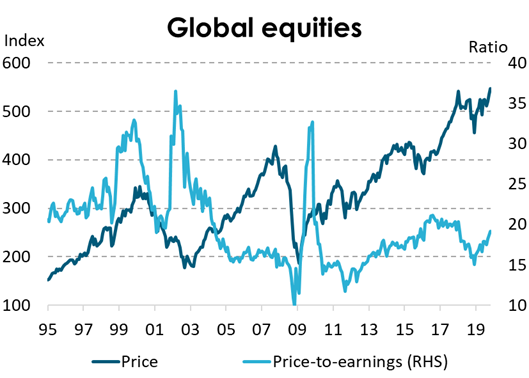 Note: Global equities are defined as the MSCI all-country world index. Price-to-earnings ratio is based on reported (rather than forecast) earnings. Source: Bloomberg.

No list of opportunities and risks for the next decade would be complete without acknowledging the myriad of things we are neither aware of nor understand.