On 8 October, a large number of retail investors will breathe a sigh of relief, as they receive their principal of $900m back on what was New Zealand’s largest retail bond issue when launched ten years ago. It has been a bumpy ride for these investors. Many lessons have been learnt. In a world of low yields and interest rates, they will face one remaining question of how best to put their principal back to work to generate income.

In September 2007, Rabobank issued a security into the New Zealand retail bond market, with the identifier RBOHA. With interest rates still high before the GFC struck, demand was strong and the security widely held. While investors were treating the instrument like a fixed interest security, it had been designed to be treated by bank regulators as a potential source of capital. Effectively, it was a hybrid security. Notably, RBOHA had two key features that would shape the experience of investors holding the security over the following 10 years.

The first key feature was that the coupon on the security was reset every year at the one year swap rate plus a modest 0.76%. At first this was part of the appeal of this security, as the Official Cash Rate (OCR) was at its peak of 8.25%, and the first coupon was set at 9.482%. However, within 18 months the GFC was in full swing and the Official Cash Rate was at 2.5%, resulting in coupons through the life of the security closer to 4%. With interest rates cut to new lows in 2016, the most recent coupon on RBOHA was set at a meagre 2.882%. Put simply, investors had been directly exposed to interest rate risk, and felt the brunt of global interest rates falling to levels that were unanticipated before the GFC. 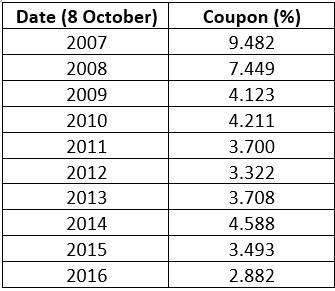 The second key feature of RBOHA was that while investors initially treated it as a security that would be repaid on its first call date in October 2017, it was technically a perpetual security which did not have to be repaid if the principal was needed to recapitalise Rabobank. Ultimately, it was a decision of the issuer in conjunction with the bank regulator and not something that could be controlled by the investor.

Before the GFC struck, retail investors would have assumed that the chance of not being repaid in full was miniscule. However, as the GFC intensified in 2008 and 2009 and evolved into the European Sovereign Crisis in 2011 and 2012, this tail risk became a material issue for European banks that needed to be monitored closely.

As a result of these two factors, from an issue price of $1 in 2007, the market price of RBOHA traded in a volatile range between 75 cents and 85 cents for much of the period of 2009 to 2012. In effect, while most investors purchased the security believing it was a fixed interest security, their experience was more akin to holding an equity. 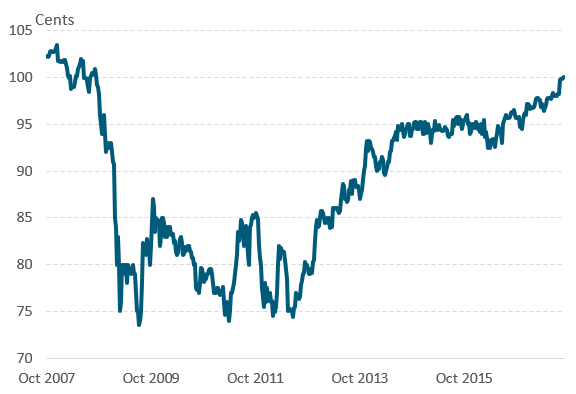 Turnover data shows that there was a large amount of trading in RBOHA, especially through the period 2007 to 2009 when the price was falling. For sellers, this meant losses were realised, as they got out as little as 75 cents in the dollar. Some sellers may have needed the proceeds for personal reasons; but many others probably sold as nerves won over after observing others selling, and weighed out the chances of further losses.

Dring a speech in March, Deputy Governor Grant Spencer, noted that the RBNZ had a “preference to move towards a simpler capital regime, not a more complex one.”[1] In this context, there may be less hybrid bank capital instruments issued in the future but, that said, there are still broader lessons to be learnt from the experiences of investors in RBOHA.

The first lesson is to know your investment.

For equity investors, this is largely about understanding the company and its earnings outlook. While fixed interest securities may sound more straightforward, in practice they can be far more complex.  There are a multitude of features that can influence their value, including whether they have fixed or floating coupons, a fixed maturity or variable call date, are secured by other assets or unsecured and if they are senior to other debt-holders or unsubordinated. All of these factors can matter, especially during times of stress in financial markets.

The second is around behavioural finance.

RBOHA provides an excellent case study in the many human elements of investing that tend to cloud decision making.  One of these is the aversion we have to experiencing losses; another is following herd behaviour over making a cold, hard analysis of the facts.

The final lesson is the age-old value of diversification within a portfolio.

It would have been a painful experience for any investor holding RBOHA as their sole, or main holding, of fixed interest or income. Rather than holding a handful of securities, true diversification in a fixed interest portfolio requires holding securities across a range of issuers, sectors, maturities and security types. In a New Zealand context, a fixed interest fund would typically hold 80 to 100 securities, across 30 to 50 issuers.

Similarly, investors seeking income should hold a well-diversified range of income-generating assets, which may include term deposits, corporate bonds, high yield securities, loans or loan products, infrastructure, listed property, and dividend-yielding equities.  These need to be chosen by following a careful investment process, to avoid the danger that they are all highly correlated with each other and act more like risky equities in times of stress.  These are the types of principles used in diversified income funds.

Those invested in RBOHA over the past ten years have had a bumpy ride and as their funds are released, many will breathe a deep sigh of relief. In this story are lessons which can be utilised by all investors going forward.