In recent months, we have highlighted how the New Zealand economy and markets seem at a crossroads, with a moderation in domestic economic activity whilst cost pressures appear to be rising. With further evidence of this scenario playing out in July, we look into the implications for the rates market through monetary and fiscal policy, as well as the impact on New Zealand equity valuations.

But first, looking back over July, global news continued to be dominated by threats of trade wars, and rising tensions between the US and its trading partners in Europe and China. However, this did not take away from the strength of global equity markets during the month, for a number of reasons. First, there was some resolution of US and European trading relations, with the initial tough line from the US seen more as a negotiating tactic. Second, the Chinese authorities reacted to the threat by providing significant local monetary stimulus, which should help offsite any drag on growth from lower trade. Finally, the US company reporting season was strong, highlighting to markets that while there may be winners and losers from trade policies, overall, we aren’t seeing a material slowdown in economic data. 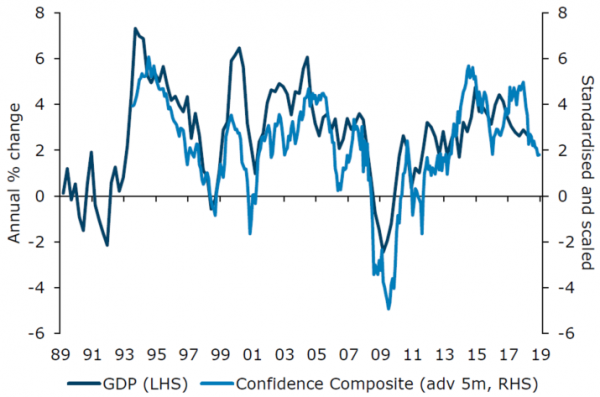 Locally, the main news during July was yet another fall in ANZ business confidence, largely removing thoughts that past weakness may have been a post-election aberration. After experiencing a period of GDP growth in the 3.5-4% region, a combined indicator of consumer and business confidence suggests the economy could be growing at a rate a little under 2%. NZ government bond yields fell around 0.10% in July, with the New Zealand equity market also around 0.20% lower. The Australian equity market returned 1.2% over the month in NZ dollars.

We consider the impact of a softer NZ GDP growth outlook for monetary policy, fiscal policy and the equity market.

Typically, business confidence at its lowest in 10 years would raise questions about whether the RBNZ will introduce an easing bias and pave the way for further OCR cuts. However, the main offsetting news over the period has been further early signs of a more persistent underlying lift in wage and price pressures, as seen in changes in minimum wages, increased wage demands and union activity, and in business surveys of pricing intentions. The RBNZ’s favoured measure of underlying inflation pressures – the so-called Sectoral Factor Model – has risen from around 1.5% for most of the period since 2012 to 1.7% in its latest reading, almost at the mid-point of the RBNZ 1-3% target range for inflation. With these two opposing drivers, we expect the RBNZ to continue its patient waiting game leaving the OCR on hold until well into 2019.[1]

A key feature of the RBNZ and NZ Treasury’s GDP growth projections through 2019 and 2020 has been the support of an expansionary fiscal policy under the Labour-led government. At the same time, the Minister of Finance has been keen to emphasise the government’s commitment to its debt to GDP targets, to underline New Zealand’s continued fiscal responsibility. To the extent that nominal GDP growth forecasts start to get revised down by the NZ Treasury, this puts potential downward pressure on fiscal surpluses and upward pressures on measures of government debt to GDP. While we believe that financial markets would be fairly sanguine about the government somewhat relaxing its self-imposed fiscal restraints, we suspect that the government would be very hesitant given the political fallout. Looking further ahead, if the government tries to keep within its fiscal goals by reducing government spending, there is a danger that fiscal policy could move from being an expansionary boost to the economy to a contractionary drag.

In equity markets, we see three important effects from a downgrade in NZ growth forecasts.

The relationship between valuation (say the Price/Earnings Ratio) and growth and inflation is neither an immediate relationship or a strong relationship. However, broadly speaking a drop of 1% point in GDP growth relative to inflation has been associated with a fall in the Price/Earnings ratio of about 2 P/E points. Today that would relate to a decline from around 18x for the median P/E for the NZ market to 16x. There are many other factors that influence the market valuation. Interest rates (and the yield curve generally), global equity valuations and global volatility are important factors affecting the risk premium on the NZ equity market. The continued high demand from KiwiSaver flows may also be associated with high (or, as some say, healthy) valuations. Nevertheless, the decline in business confidence is worth taking into account when assessing the risks in the near term valuation of the market. 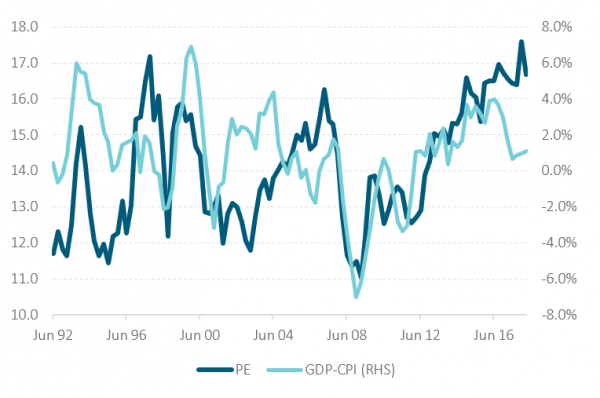 In equity portfolios, our strategy is to be overweight versus benchmark in selected quality growth companies in the financials, consumer staples and information technology sectors, where the potential rate and sustainability of growth may not be fully reflected in share prices. Conversely, we are underweight in the New Zealand consumer discretionary and energy sectors where disruption risk remains high, and the real estate, utilities and telecommunications sectors where valuations are high relative to their potential growth.

In fixed interest portfolios, our investment strategy has incorporated the view that while the Reserve Bank maintains its position that the OCR can remain on hold for some time, short-term rates will be stable, while longer-term rates are expected to rise in line with global moves. Our models suggest that long-dated New Zealand government bonds are significantly expensive, with yields too low even after taking into account continued easy policy from the RBNZ. Conversely, we see New Zealand government inflation-indexed linked bonds at attractive valuations, with these bonds providing very cheap protection against inflation rising back to the mid-point of the RBNZ’s inflation target.

IMPORTANT NOTICE AND DISCLAIMER
Harbour Asset Management Limited is the issuer and manager of the Harbour Investment Funds. Investors must receive and should read carefully the Product Disclosure Statement, available at www.harbourasset.co.nz. We are required to publish quarterly Fund updates showing returns and total fees during the previous year, also available at www.harbourasset.co.nz. Harbour Asset Management Limited also manages wholesale unit trusts. To invest as a Wholesale Investor, investors must fit the criteria as set out in the Financial Markets Conduct Act 2013. This publication is provided in good faith for general information purposes only. Information has been prepared from sources believed to be reliable and accurate at the time of publication, but this is not guaranteed. Information, analysis or views contained herein reflect a judgement at the date of publication and are subject to change without notice. This is not intended to constitute advice to any person. To the extent that any such information, analysis, opinions or views constitutes advice, it does not take into account any person’s particular financial situation or goals and, accordingly, does not constitute personalised advice under the Financial Advisers Act 2008. This does not constitute advice of a legal, accounting, tax or other nature to any persons. You should consult your tax adviser in order to understand the impact of investment decisions on your tax position. The price, value and income derived from investments may fluctuate and investors may get back less than originally invested. Where an investment is denominated in a foreign currency, changes in rates of exchange may have an adverse effect on the value, price or income of the investment. Actual performance will be affected by fund charges as well as the timing of an investor’s cash flows into or out of the Fund. Past performance is not indicative of future results, and no representation or warranty, express or implied, is made regarding future performance. Neither Harbour Asset Management Limited nor any other person guarantees repayment of any capital or any returns on capital invested in the investments. To the maximum extent permitted by law, no liability or responsibility is accepted for any loss or damage, direct or consequential, arising from or in connection with this or its contents.